It’s taken me three months to take this photograph.

Every once in a while I’ll prop my phone up on some pillows or books trying to create the right camera angle, or I’ll hang up a coat trying to makeshift a quarantine backdrop. Sometimes I take my sun lamp from the bedroom to the bathroom to the kitchen, plugging it in to all of the outlets looking for the right balance of shadow and light.

And I’ll stare into space for a couple of seconds, a couple of minutes, maybe an hour. Who knows. Time hasn’t existed for a while now. Then I’ll invariably unplug the light, take the coat down, turn off my phone.

I’ve been trying to find a balance between taking care of my mental health and being the productivity machine that I desperately want to be, and usually – to a degree – am.

In the beginning I felt like a zombie. I slept all day. I couldn’t quite process the illness and death that was sweeping around the world nor the politics that were supposed to make things better. I couldn’t handle the death of my grandfather and the inability to be with my family. There was no giving and receiving of hugs. And I really couldn’t handle being an empath. I thought that hiding under the covers would save me from everyone else’s thoughts and emotions as if feelings couldn’t penetrate a few layers of fabric.

I told myself it’s ok to not be ok. I told myself that the goal for this time is to heal- I was sure I had the disease  early on myself, showing mild symptoms but unable to get a test. But when the symptoms faded away, I wanted to stay hiding under the covers. I told myself maybe I was catching up on all of the sleep that I had missed in my teens and 20s, having to keep all As in school while training and auditioning to dance professionally 6-7 days a week, and then in New York dancing 6-7 days a week with the Joffrey Ballet and running my own company New Bridges Ballet while in college full time and holding down a restaurant job. I told myself that maybe I was curing myself from the rare and incurable virus that has been living inside of me for the past 20 years. I told myself lots of things.

And I’ve realized that I gain a lot of my self worth from productivity, and more importantly, being good at it. I guess it stems from a childhood of strict Christianity, even stricter ballet masters, and my father yelling ferociously at me, telling me I was throwing my life away when I came home with a report card of all As, but some of those As not being high enough.

This isn’t exactly a new realization. I remember years ago sitting at Rudy’s, the favorite Hell’s Kitchen dive bar with cheap beer, free hotdogs, red duct tape on the booths, and the tiny bar packed full- every patron a character, many of them left over from a grittier New York that existed long before I was born. I was with my neighbor Steve.  He was showing off some of the photographs he had taken of New Bridges Ballet. One of the women stopped us and asked:

“I heard that artists who want to be famous feel like they don’t have enough love in their lives so they seek love out from the whole entire world. Is that true?”

After a terribly long and unbreathable moment of silence, Steve and I turned back to our beers and the woman finally found something significantly less interesting to say.

I guess I had been conveniently thinking that since my career ended and the possibility of being a famous ballerina was no longer there, I had been somehow cured of the need for being loved by being famous, just because there was nothing left to be famous for.

But it turns out that feeling is still there. I felt unproductive, and thus unworthy, unlovable. I’ve been working on that feeling a lot. And finally, yesterday I felt brave enough to take the picture I’ve been trying to take for the past three months.

So do me a favor, tell me I did a good job. Tell me you love the photograph and the writing and me. Tell me I look beautiful. Or don’t. It’s up to me to find that within myself. And I’m working on it. Wear your masks y’all. 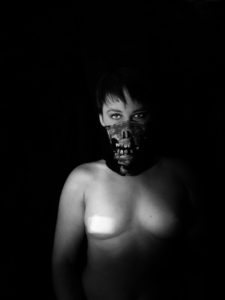 *To view the uncensored version of this image while supporting an out of work artist, please  sign up to become a patron at http://www.patreon.com/sargenti  With your membership, you’ll receive access to all of my fine art nude modeling work, shot by myself and many amazing photographers around the country. Thank you for your support!