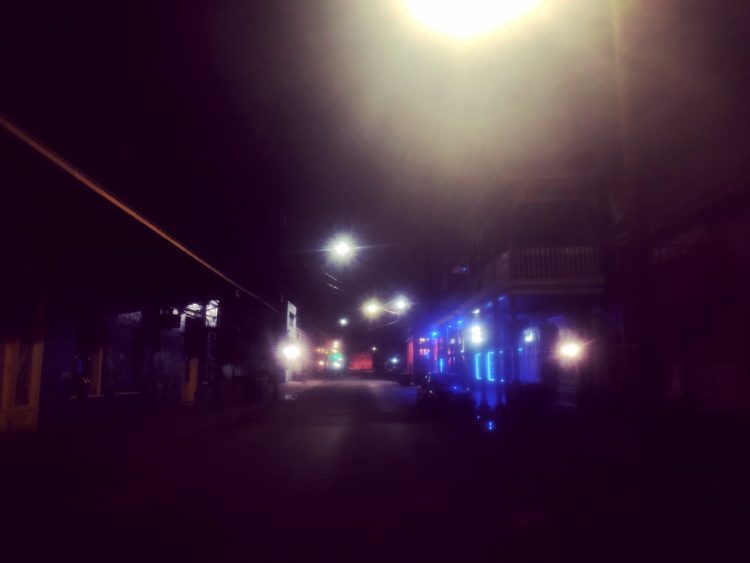 I went to see my city last night. It was 9pm on a Sunday. Late March. Busy season. Empty. Quiet. It’s strange how the smell of piss gets so much stronger when there’s no trace of beer and puke and sweat to wash it down. Even the panhandlers are gone. No one to panhandle to. I wonder where they’ve gone. The bars are boarded up- prepared for an invisible hurricane that’s rushing through our streets and homes and in our veins. It’s quiet here. Even the ghosts have quarantined themselves tonight.

The lights of neon signs and lantern flames glow bright tonight. It’s a shame that no one will see them. I forget that I count as someone.  I close my eyes and imagine a year ago last spring. It seems so far away. I think of all the times I spoke of Yellow Fever, Scurvy, Smallpox. The bodies on the streets. I think of just one month ago, Mardi Gras Day. The revelers on the streets. The glitter is still here. I open my eyes and continue on.

And then some signs of life. An arrow. In chalk. In the middle of the street. More chalk. More arrows. “Hot Food This Way.” A block away a light streams out of the open door of NOLA Poboys and in that light stands a man with painted silver hands and a painted silver face. He wears blue jeans and a brown t-shirt. I used to see him every day on the corner of Bourbon and St. Peter Street until he moved to a different location. I’ve never seen him wearing clothes that didn’t match his silver skin. I wonder if he half way tried to earn some money in this empty town or the paint just stopped rubbing off.

On Royal there’s a small gathering of people outside the Rouses. I wonder if they still have their jobs. I wonder if they qualify for unemployment or food stamps, but knowing who they are they’re probably just like me. Laid off without aid and wondering when the tourists will come back.

Down the street there’s a recording of Louis Armstrong playing. A reminder of a New Orleans that existed long before I showed up here. I think about how may manifestations this city has gone through. And I wonder how long this particular one will last. And what’s coming next. Before the virus I’d be taking drunken tourists around the French Quarter, telling them of the histories and the hauntings that took place here at this address, over there on that corner… and now I feel like I’m the one who’s doing the haunting.

And my friends, my friends would be doing exactly the same thing. Our voices loud and strong keeping the spirits alive in the minds of those who choose to reside elsewhere. Our voices loud and strong blending into the cacophony of sounds of laughter and music and sirens and heated conversations, the tin-like reverberations of beer can tap shoes tapping out half-rhythms on the sidewalks and the jingle of change as the old timey cash registers open and close at the establishments that don’t take credit cards.

And in the distance a figure appears. I know him by name. I meekly mumble a greeting and my words echo off the buildings. Nothing to absorb them and carry them away into the ether. A residual haunting. Over and over it echoes- a repetition of right now- a time I’d rather forget. As he passes by he says “I’m still here.” 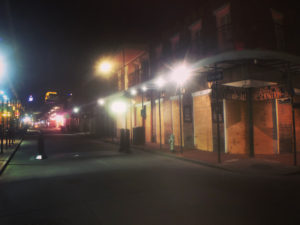 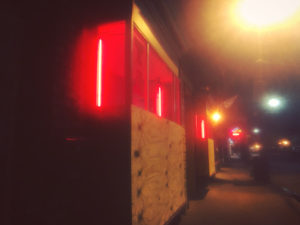 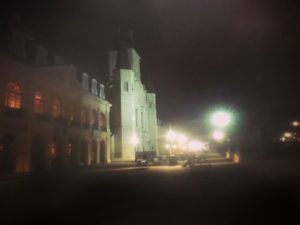 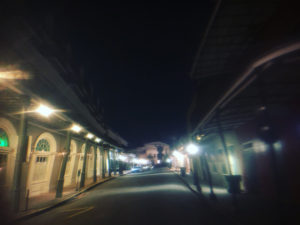 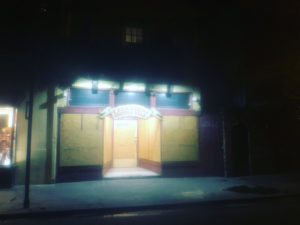 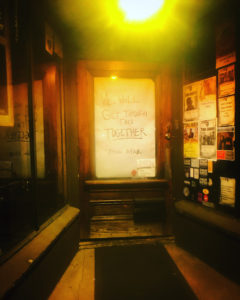