I’ve written about my experiences with Epstein Barr here before.  A few months ago I found a book entitled “The Complete Dictionary of Ailments and Diseases” by Jacques Martel.  It lists the emotional constructs at the root of all diseases and dis-eases that humans experience.  When I looked up my symptoms, the wisdom that the book offered resonated with me so deeply – almost too deeply – to the point where I was more than a little uncomfortable seeing my demons written out so plainly in black ink on the crisp white pages. But part of that book stuck with me.  It was a portion of the prescribed affirmation used to cure the emotional root cause of the disease, thus in turn curing the disease itself.  This is something that I’m still practicing.  I’m nowhere near perfect.  I still have a lot of the Epstein Barr pain in my body.  But I’m working on it.

This series of photos was taken hours after someone attempted to break in to my Hell’s Kitchen apartment while yelling obscene threats at me.  I was terrified, shaking in the kitchen trying to decide between the broomstick and the frying pan as my weapon of choice if my attacker made it inside.  I was still terrified when these photos were taken.  My internal trembling didn’t stop for several days after the incident.  But this was how I chose to thrive in the wake of this experience.  I didn’t feel brave.  But I knew that I still had the ability to do brave things.  So I practiced being brave by climbing a rooftop water tower while wearing nothing but heels and lingerie.  And I photographed it.

Unfortunately, most of the photos from this session were lost.  My phone had not been working properly for quite a while (I had to text someone to call the police for me because my phone wasn’t making phone calls at the time) and when I traded it in, I found out that iCloud hadn’t been properly storing my photographs either.  This is what was salvaged.

And so I thrive. 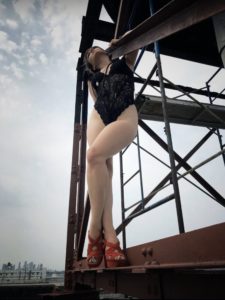 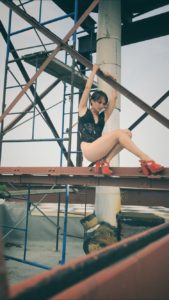 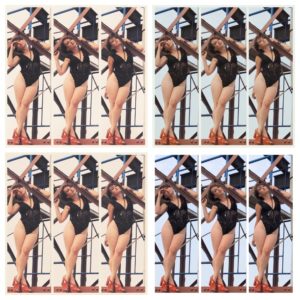